The time has come where a once beautiful relationship has turned into a knife-fight over who gets to keep the cat. Before you stab one another, make sure you adhere to the following protocol so you don't look like a Facebook fool. 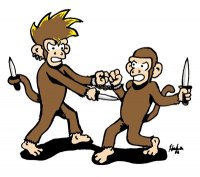 Immediately change status from ”In a relationship” to "Single", or no status at all. It’s a logical first step. How could you go from that magical hook-up at some freshman’s sweet apartment keg party to this? Shit looked like true love when you were downing your 9th serving of Natty Light from a cup that you’re pretty sure someone else backwashed into. The only people who can understand this kind of pain are Boyz II Men; did they EVER sing about a relationship that went right? They’ve had to change their Facebook relationship status more than anyone, and they have 8,000 songs of heartbreak to prove it.

The single biggest advantage in Facebook break-up momentum comes with de-friending each other. If you are slow on the draw and de-friended by your old flame first, it will be clear to EVERYONE that you were always the proverbial “catcher” in the relationship by your unwillingness to let go. I knew this one kid who utilized the “Ladies First” mantra, allowing his ex-girlfriend to de-friend him first… He’s in Witness Protection now, but not before having his old birth certificate thrown around in a game of keep-away by the Feds who had also heard about his Facebook facial. Unfortunately, there are rules of engagement you need to follow. You need to wait until the actual break-up before removing him/her from your friend list. Not getting a head start puts guys at a distinct disadvantage as girls have freakishly nimble fingers when it comes to navigating around Facebook. You don’t have to believe me, but follow any girl around for a while, and you can get a taste of their tapping prowess (if she doesn’t Mace you first) by watching how they operate text messaging on cell phones. I can’t type 40 words a minute on a keyboard, while the average girl can hammer out 873 words per minute when texting (discluding any smiley or frowny faces they decide to tack on at the end just for funsies). So as guys, you need to be crafty. If you’re going to break up with your girlfriend, be sure to do it with home court advantage where you have quick access to a computer. Do the deed, distract her with something shiny, and then de-friend immediately. If you don’t think it’s a big deal, I pose to you two hypothetical situations. You can approach your friends and say: A) The bitch just de-friended me! B) I just de-friended the shit out of that motherfucker. Yeah, I think we can all see the preferable option. Be pro-active, de-friend first.

Also, since we know that a lot of exes like to stalk their former flame on Facebook via mutual friends, make sure that your friends and family also delete the ex ASAP!!! This will prevent the ex from keeping tabs on you, seeing your photos & comments, possibly stalking your new love, and basically keep her from trying to insert herself back in your life again, should she be the Fatal Attraction type! 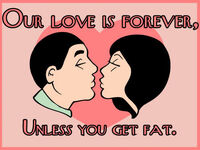 Remove all photos of you and the offender together. Remember, memories captured by digital camera aren’t real and you shouldn’t be forced to view your shame on a daily basis… Just try not to cry, or I’ll find you and box you in the ears. De-tagging is the equivalent of burning anything he/she ever gave you in a huge bonfire backed with a soundtrack from Coldplay or some incredibly deep music like that. Of course, when you get back together, you’re going to have to explain where that hat she gave you went (Or the digital picture equivalent… Whatever).

Removing all his/her friends from your friend list. This is immensely enjoyable for guys, as the odds are you think most of her friends are bar-slut harpies who have made your life reasonably miserable for the duration of your time together. The prospect of never having to speak to these girls again not only makes the break-up worthwhile, but it makes you look forward to the next relationship you have just so you can feel this sensation again.

Remove all traces from "About Me" SectionEdit

Remove all traces of him/her from your “Interests” and/or “About Me” sections. This might be the unkindest cut of all as you have to see that at one point, your pastime included, “Cuddling with my baby<33333333333”. For guys this is especially hard, because along with the deletion of this once fond memory, they realize that having had that in their profile made them look like huge pussies… Therapy usually follows.

Make sure that your status always says something awesome like, “John Doe is… Out at the bar with his bros fucking like 20 girls at once. Updated 4 seconds ago”. Nothing says “I’m over you” like going to the bar, getting drunk, and "fucking like 20 girls at once”, even if you are actually rocking back and forth in your closet smelling her old sweatshirt and crying on a printout of her new Facebook profile picture. Whatever you do, never, ever, let your former lover see Facebook weakness from some status message like “John Doe is… depressed and ready to overdose on Vicodin. Updated 4, 7, and 20 seconds ago”.

Remember how your significant other was always trying to get you to do things that were completely out of character for you? Break-ups provide the opportunity to finally venture out and stick it to the other party. For guys this might mean having to see Pink live in concert. And even though the music sounds like a 46 year old man with emphysema whose voice cracks at the high notes, it is for the purpose of revenge... There is no nobler calling. Girls on the other hand can take the opportunity to see a WWE event and have the immense privilege of slapping hands with a sweaty wrestler who will likely die of a massive coronary by 40. It is important to note that none of this means anything if you don't have it documented. Make sure to take 80 pictures of you in various poses around the venue and devote a whole Facebook photo album to the trip.

Remember: Relationships are temporary, but Facebook is forever, so make sure you never have to relive this chapter in your life.

Retrieved from "https://facebookstalker.fandom.com/wiki/Breakup_Etiquette?oldid=4098"
Community content is available under CC-BY-SA unless otherwise noted.